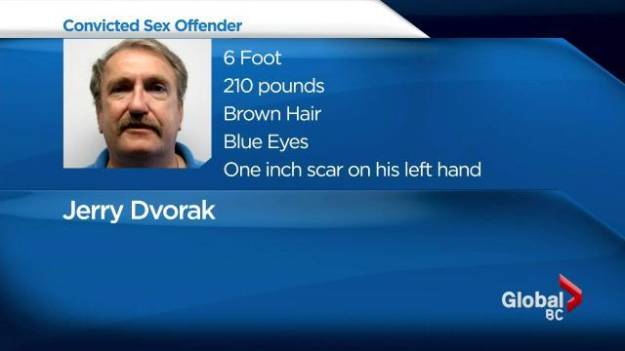 Police are warning the public a three-time federal offender with convictions for rape and sexual assault has finished his sentence and is living in Vancouver.

Jerry Dvorak, 53, poses a “risk of significant harm” to the safety of teenage and adult women, especially sex workers, Vancouver Police Department said in a statement.

Dvorak is on a long-term supervision order and must abide by a list of conditions: avoid sex workers and the areas they inhabit; not be around women under 18; abide by a curfew; not consume alcohol or drugs, report all relationships and not associate with any people believe to be involved in criminal activity.

Anyone witnessing Dvorak breaking any of these conditions is asked to contact their local police department.

Vancouver Police issued a public warning in August that Jerry Dvorak has completed his jail sentence and is living in Vancouver. Dvorak is a three-time federal offender with convictions for rape and sexual assault. He poses a risk of significant harm to the safety of teenage and adult women, especially sex workers.

A convicted sex offender who was released this summer after serving 10 years in prison for violently sexually assaulting a young prostitute remains a high risk to reoffend, according to a recent Parole Board of Canada decision.

Jaromir (Jerry) Dvorak, 53, is subject to a 10-year long-term supervision order, the result of being deemed a long-term offender. He is currently residing in a Vancouver halfway house and is subject to a number of special conditions.

His victims range from young, vulnerable girls to adults.

Dvorak also has outstanding weapons and sexual assault charges from Saskatchewan from 1991. It was alleged that Dvorak sexually assaulted a young woman who was babysitting for him.

In his most recent psychological risk assessment, Dvorak was considered a high risk to reoffend generally and violently. The most likely target of any violence would be a woman. Dvorak’s release history is also poor — he went unlawfully at large and committed crimes during previous releases.

During the four months he has been in the community, Dvorak appears to have abided by the conditions imposed, including reporting to parole supervisors and police. He has been in counselling and participating in programs and has cooperated with the staff at his halfway house.

Dvorak has family support and has asked to be transferred to a halfway house closer to his family, which the board says will be considered in early 2014.

Although his performance on release thus far has been satisfactory, the Parole Board of Canada, in a recent decision, ordered that he continue to reside at a halfway house for the next six months.

“Your (case management team) indicates that you have not been in the community for a long enough period to demonstrate any significant changes in your risk and progress,” the board wrote.

A residency condition was seen as necessary to manage Dvorak’s risk in the community and help with his reintegration.