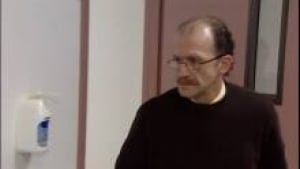 Convicted child abuser Kenneth Paul Canning is on his way to jail, still claiming to be innocent.

Canning, a former minor hockey administrator, was sentenced to four years in prison on Tuesday in Sydney provincial court.

Judge Peter Ross said while the 49-year-old man wasn’t violent and didn’t solicit his four victims through the sport, he worked to gain the families’ trust and find chances to be alone with the boys.

The incidents occurred between 1980 and 2009 and involved four complainants, who cannot be identified because of a publication ban.

Canning — who helped administer the Sydney Minor Hockey Association and owned a business offering spring and summer hockey camps — expressed no remorse and continued to maintain his innocence on Tuesday. He suggested in court that the victims and their families should continue to search for the truth.

One of the victims, in his early 20s, left the courtroom after Canning made that suggestion. Several family members followed him out.

After the sentence was handed down, the victim who first came forward in the case reacted to the four-year sentence with relief.

“Pretty happy with it. It’s been a long haul and I’m glad it turned out the way it did today. It’s a good sentence and I think it’s appropriate,” he told reporters.

“He has a lot of days ahead of him to think about what he’s done.”

Another victim said he found comfort in the judge’s comments.

“What the judge said was the only person in the room that wasn’t feeling guilt or anything was the person that should. And it was so true,” said the man.

“There was no remorse. He will never admit it.”

In victim impact statements read on Monday, relatives of the victims said they are tortured because they didn’t protect their boys. One victim said he regretted not coming forward sooner.

“No matter what sentence they would give him [it] is never going to be enough, but I think justice was served,” said the mother of two of the victims.

Canning, who defended himself, suggested house arrest with a conditional sentence, along with counselling and treatment.

In handing down the sentence, Ross said the most important factor is that the sentence needs to be a deterrent to others in the community who have the same tendencies.

Canning is also facing five new charges from another man who says he was abused as a boy.

SYDNEY — A Sydney man sentenced to prison for sex crimes involving young boys has been granted unescorted temporary absences by the National Parole Board.

Kenneth Paul Canning, 51, formerly of Atlantic Street, was granted three 48-hour absences and three 72-hour absences in a board decision dated April 29. The absences are for the purpose of assessment by two community-based residential facilities.

While Canning initially denied his involvement with the crimes, the board said he now accepts responsibility.

At the time of that sentencing, the court was told Canning had underwent a sexual offender assessment profile which determined he had a strong attraction for pubescent boys who displayed signs of passive resistance